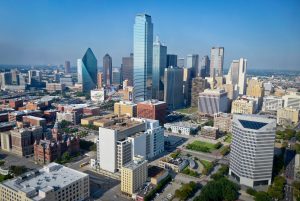 Dallas-Fort Worth has been slow to recover from February’s massive winter storm that closed rail terminals, distribution centers, and trucking operations across the US South and Midwest, leading to heavy intermodal disruptions. Union Pacific Railroad suspended all service into Dallas-Fort Worth and BNSF dramatically reduced service there for three days due to snow, ice, freezing temperatures, and power outages. This led to a buildup of containers in the ports of Los Angeles and Long Beach, which poured into Texas once the terminals reopened.

“Much of our ability to balance chassis supply also depends on the natural flow of containers returning to rail ramps, providing bare chassis to unload trains as they come in,” DCLI said earlier this month in a statement to JOC.com. “With empty containers and export loads not coming into these facilities for the better part of a week [after the terminals reopened], we lost a key source of chassis supply.”

With chassis already in short supply in California, New Jersey, and New York — and in rail cities such as Memphis and Chicago — few locations had spare equipment, according to chassis providers. Beneficial cargo owners (BCOs) paid a steep price for these delays, in the form of demurrage (storage) fees for containers unavailable for pickup and with little information forthcoming from the railroads about when those boxes could be accessed.

DCLI and TRAC said that the biggest impact on improving fluidity would come from reducing the street dwell — the time between when a chassis is taken out and returned — as the sooner a chassis is returned, the sooner another BCO can get its container.